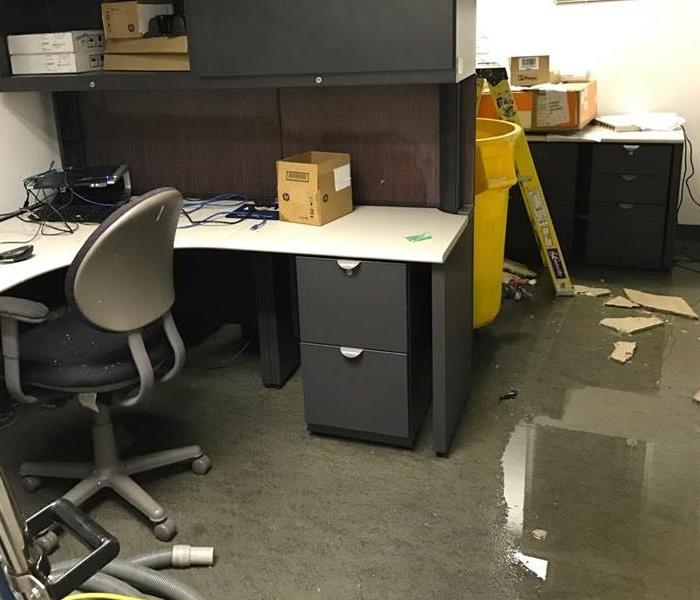 How Is Water Used in an Office Building?

John: Sure. So what are some of the ways that water is used in a typical office building?

Dan: Yeah. First of all, a typical office building is always going to have restroom facilities. So that’s one exposure area. Beyond that though, you may have certain office suites that have their own kitchen, break rooms, et cetera. So they could have dishwashers, they could have sinks, they could even have a complete kitchen setup. So you can have a variety of different uses, you might have some medical facilities within the office building that have, a dentist’s office for example, will have a lot of water fixtures, a medical office will have multiple restrooms and sinks right within that medical office.

Dan: Absolutely. So the bottom line is the more water fixtures you have, the more areas for burst pipe damage. Could be a $6 supply hose on a toilet goes and in an office building, it’s especially problematic in that you’ve got multiple stories oftentimes. So if there’s a problem on the sixth floor, you could have water damage on the sixth floor that affects five floors underneath it. So it compounds the potential for water damage in these situations. And it’s a matter of not only cleaning up the mess from the water damage, a lot of times valuable equipment gets destroyed. It could be that paper records get destroyed.

Oftentimes there’s mold damage, you have to shut the units down while remediation work is being done. And again, there could be mold there that could be very, very problematic. So you have loss of business in these situations. So water damage in general, it’s the number one claim for property casualty companies for commercial facilities, it’s about 30% of their claims. But it’s totally avoidable with today’s modern technology, with whole building leak detection that’s internet connected with automatic shut off.

How Does Water Hero Provide Leak Detection and Automatic Water Shut Off?

John: Okay. So talk about that a little bit and Water Hero and how that works in terms of shutting off the water in the case of a catastrophic burst pipe or something like that. And, also, in terms of just determining whether or not there might be smaller leaks happening that you’re not aware of.

Dan: Sure, sure. In an office building there’s different approaches you can take to mitigate water damage. So one would be a Water Hero unit installed for the entire building. And with Water Hero we have a variety of sizes from three quarter inch and one inch that might be used to protect an individual office unit up to inch and a half and two inch units, it could be deployed on strategic risers throughout the building that might supply a group of 10 offices. To three, four, six, eight inch Water Hero units that could be at the main domestic cold water coming in for the entire building.

So there’s a variety of different approaches we can take to put together a risk mitigation program for the building, but the way each one of these units works is they’re basically a utility grade brass water meter, very robust, we had them built to American water works association specs. These are billing accuracy meters, so they have very, very good accuracy and can pick up relatively low flows. But the difference is instead of a traditional utility grade meter with a black register on the top, an odometer, that the water company uses to read the gallons of usage, we put our electronics on the top. So we’re reading the water flow 200 times a second.

We also have a temperature sensor on there so we can get the ambient temperature there, which can provide valuable freeze alerts. And then all that data is fed into our main controller unit that’s typically six feet away from the actual brass smart water meter. And that has a very powerful microprocessor as well as a wifi chip. So there’s also a rechargeable lithium polymer battery in there. So if power’s out, that microprocessor will still automatically shut the water off when certain water flow triggers are exceeded. And it also gives you the option, sometimes we can connect cellular, people would prefer to connect cellular versus wifi.

But right in line with that smart meter then is a motorized ball valve shutoff. And again, we have units that are three quarter inch size units up to 12 inch units and they can be deployed in a variety of different situations.

John: Right. So you have the option of shutting off the water to the entire building if it detects that there’s a major leak or like you said, if you as the building owner wanted to install a Water Hero unit for each individual office, you could do that as well. And then that would give you some granular information about water usage from each different office individually.

Dan: Yeah, exactly. And so there’s really two main drivers for this too in office building situations. One is just protection from burst pipe damage. We’re seeing some situations where the insurance companies are actually requiring it because there’s been a history of water damage in the building and claims can be an excess of $1 million in a building. So the insurance companies are a lot of times requiring that buildings install these. But a lot of times owners are proactively doing this because all of those other reasons, just the damage itself, the disruption, the loss of business can be catastrophic.

But the other driver’s water savings. It’s very powerful getting real-time water usage information so that in some buildings they typically would get their water bill from the city every three months. And we’ve seen cases where they get surprise water bills, it’s $20,000 more than they typically run. And it could be a combination of toilets that had eroded toilet flappers that were running continuous to other type leaks throughout the building. And instead of waiting three months to realize you’ve got a problem, Water Hero can tell you in minutes, you simply look at your data. An interesting story, when I put Water Hero in my house, the first thing I did is I looked at my 24 hour usage, we give you a bar graph. And I could tell, wait a second, we’re still using 10 gallons of water at 1:00 AM, 2:00 AM, 3:00, and 4:00 AM and so I realize there’s a leak somewhere.

And it could have been going on for years unbeknownst to me, but I picked it up the second I looked at that chart, I could tell the water never flatlined. So same thing for an office building. You should not be seeing much usage at 1:00 AM, 2:00 AM, 3:00 AM when the building’s unoccupied or on the weekends. Yeah, exactly. And so a lot of our office customers love the fact that they’re saving significant money on their water bill as well as getting this peace of mind that they have burst pipe protection.

John: All right, that’s really great information, Dan, thanks again for speaking with me today.