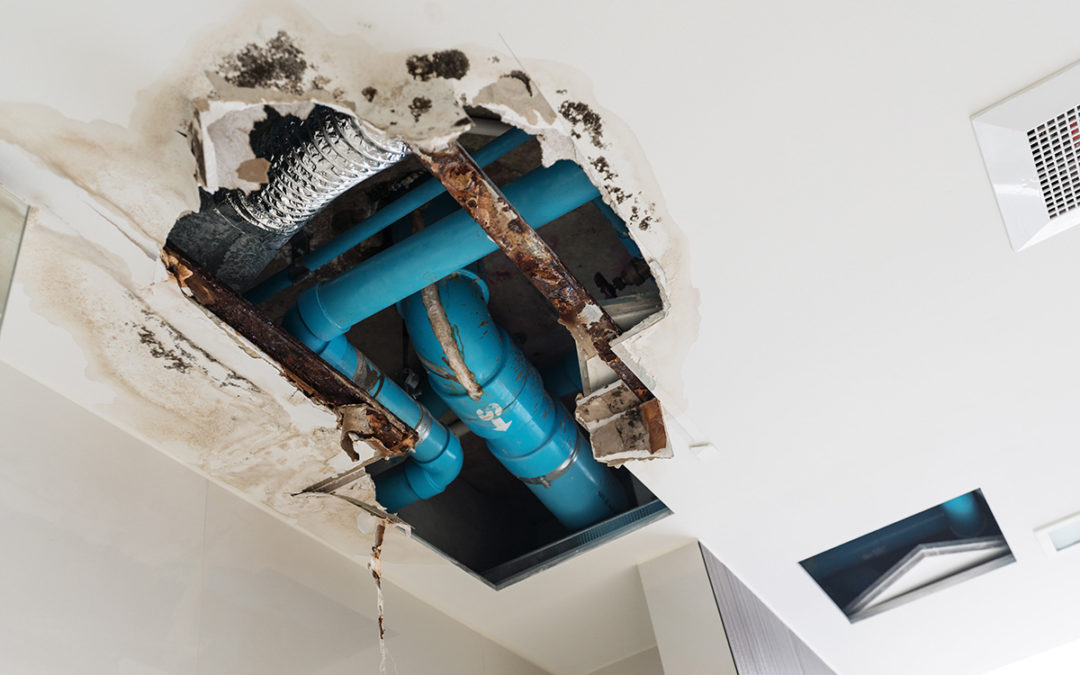 John: Sure. Dan, when we’re talking about condominiums and homeowners associations, we’re talking about bigger buildings, maybe stacked apartments, multiple condos in a big building or even a group of buildings. What are some of the issues that owners of those condominiums or homeowners associations deal with in terms of detecting leaks and water usage?

Dan: Typically, water damage for any facility, any home, any building is a problem. It’s the number one claim for insurance companies at about 30% of claims, so it’s a huge issue everywhere. It’s compounded in a multi-family situation like an HOA, especially where you’ve got buildings side by side, townhouses, or even worse when you’ve got, let’s say, a four-story building. We were just installed in a 170-unit facility down in Nashville. They were having problems when a unit on the fourth floor would have a water leak, it would destroy five other units. They were actually having problems getting insured because the insurance company said, “You’ve had too many incidents of water damage and it’s getting too expensive. Unless you can mitigate that risk with whole building leak detection, like Water Hero, we’re not going to underwrite you.” That’s one problem, just the water damage. The other part of it is that in an HOA situation, a lot of times owners can end up suing each other. Hey, I’m on the third floor and you were negligent on the fourth floor, John. Your unit ruined my unit.

John: Right, it wasn’t my fault.

Dan: Yeah. Again, it could take that fourth floor could destroy four or five units in the building. It’s a compound problem because you have all these individual owners that you’re putting them at odds. It’s the last thing the homeowners association wants to deal with, is water damage in general, but especially when it’s multiple units, and then you’ve got acrimony between individual homeowner units.

John: The association doesn’t want to have to pay for the damage done by one of the owners, say.

Dan: Right, and they don’t want to see litigation between owners of people on the first, second and third floor against someone on the fourth floor.

Dan: It’s very disruptive for the associations. Water damage to begin with can be … It’s a complete catastrophic event and it can be a nightmare, but then to compound that with fighting between owners in the HOA, it’s a train wreck.

John: Right. Now with a multi-unit building like that whether it’s condos or whatever, is the leak detection and automatic water shut off valve installed for the water going into each individual unit, or is it installed where the pipe is coming into the entire building overall, or both?

Dan: We have a variety of options, John. The beauty of our solution is we have a wide range of sizes. We have three-quarter inch and one inch units that could be used to protect each individual condo unit. In that deployment in Nashville, for example, they put 170 Water Hero units, so each one of the units has their own three-quarter inch cold water feed, so there’s a Water Hero in every single one of those condo units. In other deployments, it could be that you just want to monitor and put leak detection on certain strategic risers that might supply a group of units.

John: Right, like the third floor, or the third and fourth floor together or something like that?

Dan: Yeah. We have inch and a half and two-inch Water Hero units that can go on risers, and we even have Water Hero units of three, four, six, eight, 10 inches that could go at the main water for the entire building. There’s a variety of different options, and we’re the only company that has all these different sizes. We can offer a combination of approaches to it. Really, it’s a matter of coming up with a water risk mitigation strategy for the HOA.

John: Now how would maybe an owner of a condominium, you said that it was your Water Hero units were installed on a 170 units in one facility. Is the owner of that facility getting individual information on water usage for all 170 of those units? Are they monitored? How are they monitoring all of that?

Dan: Yeah. In that situation in Nashville, they have it so that each homeowner can log into the account for their unit. They can set the triggers where they want. They get the real time water usage information, but they have an agreement with the building management company that they can also log into that account and help monitor the situation. It’s especially important where you’ve got condos that go unoccupied for a long period of time because that’s when the worst damage occurs.

Dan: It could be a situation where it’s a seasonal condo that people only use in the winter, so nine months out of the year it’s empty. When a pipe breaks in one of those units, it could run for a long, long time especially if units around it or are unoccupied.

Dan: That’s the worst scenario, is when you’ve got unoccupied condo units.

John: Most apartment buildings and places like that would have a certain amount of vacancy. As people are moving out and they don’t have somebody to move right in, there’s going to be a period of time there where most of the units are unoccupied for a certain amount of time.

Dan: Exactly. Water Hero is a connected device, so the beauty of that is you can have multiple stakeholders. You can have the unit owner can get alerts when certain water triggers are exceeded. It’s all based on continuous flow of water. In my home, for example, I have it set. If water runs for more than 10 minutes when I’m in home mode, when I’m there, I get a heads up. If we run for 20 minutes, Water Hero automatically shuts the water off and sends me a text message. It’s great because now the kids aren’t taking 45 minute showers. I’m saving money right off the bat just because we’re all conservation oriented, but those are all user configurable. You can change those in a matter of seconds from any device. You just log into your account on MyWaterHero.net and you can access it from a laptop, a desktop, a tablet, from the browser on your phone. It’s very, very convenient.

If we’re away, I can in a matter of seconds, switch it to away mode and there I have much tighter triggers. If water runs more than one minute, I get a heads up. If it runs for two minutes, it’ll shut the water off. I could set that for one minute and one minute. If you have an ice cube maker, you might set it, that runs for a minute and a half. You might set the shut off for two minutes, so you’re not always shutting the water off because that ice cube maker may kick in. It gives you great peace of mind. We also put a temperature sensor on the water here device so that can give you high and low temperature alerts in a cold weather climate, it’s a freeze alert. My Water Hero is in my basement. It’s temperature ever drops below 40 degrees, I get a heads up because my basement is never below 45 degrees or never above 80 degrees.

I have it set at 40 degrees for what I call a freeze alert, and I actually get a premium discount from the insurance company for having that. I also get a second premium discount for having a leak detection device. Then on the high end, if it’s 85 degrees, something’s wrong. There could be a fire in my basement, things like that. It’s great having this smart technology that can provide great peace of mind in general. If I’m away from my home, it’s nice to know that it’s protected. I can go online. I can be in Florida and check the temperature in my basement in Boston. I can turn the water on and off from anywhere in the world I have an internet connection. I can see real time water usage information.

The other benefit for condo owners is they can get savings on their water bill, that you could have an eroded toilet flapper that could cost you $1,000 a year. In my situation, when I installed a water heater in my house, I noticed we were using 10 gallons of water at 1:00 a.m., 2:00 a.m., 3:00 a.m., 4:00 a.m. It turned out I had one eroded toilet flapper, and it could have been doing this for years. Water was silently leaking past that flapper and silently filling up to the tune of $1,000 a year. Again, in a condo situation where you might not be there for nine months, that can add up real quick.

John: Right. If you did have an individual Water Hero unit installed in each unit, again that 170 unit in Nashville, you’d be able to pinpoint that and say, “Hey, that one unit is having a problem where overnight the water is running constantly.” Then you could call up those owners and say, “Hey, could you check in your bathroom and see whether or not the water is running on a regular basis?” Something like that.

Dan: Exactly. Yeah, the building management can go into the unit and see, the Water Hero sent an alarm. They can go in there and remediate the situation in minutes versus waiting months and getting a shockingly high water bill.

John: Right. Then the burst pipe, temperature alerts and burst pipe, the water shut off. I imagine that’s especially important for the Northern climates like here in New England, or in Northern United States or in Canada. Are the insurance rates higher in those places during the winter because of the potential for burst pipes?

Dan: What’s interesting is that there is definitely a correlation to cold weather. In the United States in general, burst pipe damage is the number one claim for property and casualty. About 30% of claims is water damage, so it’s the number one controllable claim for property and casualty insurance companies. That’s why they’re starting to give premium discounts. They would love to see everyone install these, and so they’re trying to incentivize people to install them. In Canada, 45% of claims are water damage.

Dan: It’s especially a big problem up there. It definitely correlates to temperature, but that said, we see a lot of damage in places like Southern California and Florida too. Any place where you’ve got plumbing, it could be old plumbing, it could be $6 supply hose and the toilet just decides to give.

John: Right. For condominium owners too, they might own multiple facilities all in different locations, possibly even different states and things like that. Having the connectability where they’re able to log in online and monitor all of their facilities all at once, that must be a great benefit as well.

Dan: Yeah, it really is. With Water Hero, you can associate multiple devices to the same email address. You use the email address as your log in, and then you have a customized password. We have a lot of owners that have exactly that situation. They log into MyWaterHero.net and they could have their main home on there as well as one condo, and it could be a rental property. They can see all three of those on the same dashboard and then just real easily drill into each individual unit. It makes it really convenient to monitor all of their properties, the Water Hero units for all their properties from one dashboard.

John: All right. That’s really great information, Dan. Thanks again for speaking with me today.

Dan: My pleasure. Thank you, John.