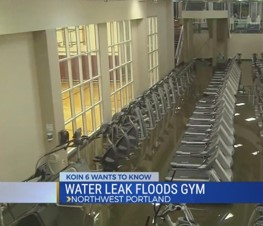 John: Sure. Dan, what is it particular about fitness centers in terms of how they might use water?

Dan: What’s unique about fitness centers, John, is that they have a lot of water exposure. They have a lot of different water devices, more so than a lot of other commercial businesses. Most businesses will have restrooms, let’s say, in a health center you have restrooms, you have public showers, there could be different break rooms. You’ve got a wide variety of water devices and the more pipes, the more showers, the more toilets, the more sinks you have, the more you’re at risk for water damage. It’s especially important for fitness centers to have smart leak detection.

John: Right. What are some of the typical things that might happen? In terms of water usage, like you said, there’s shower facilities, you might have somebody leaving on a shower and then walking out the door or a sink or something like that, any other issues that might be particular to a fitness center?

Dan: I can’t tell you how many times I’ve been at the fitness center and showers running and no one’s in the-

John: Shower. Do you see somebody in there? People walking by?

Dan: All the time. I’m in the business so I’m tuned into, I will proactively go over there and just shut it off.

Dan: I hate to see the water waste. But in a facility like that, a shower could be running all day long.

Dan: Especially in some areas where water is really expensive, facilities sometimes get shocking water bills. And the problem is you only get the water bills in some areas every three months. And sometimes people will open up their water bill and it’s $10,000 more than it had been the previous month.

Dan: It could be that there’s showers that are just not being handled efficiently, they’re just running for a long period of time. Or it could be toilets or multiple toilets that have eroded flappers and they’re silently leaking water through that flapper and silently filling up. And with Water Hero, you get real time water usage information and you can look at a 24 hour bar graph of your usage. It’s easy to see that you’ve got abnormal usage. It’s very, very powerful. And we’re also based on our triggers our continuous flow of water. Picture in your fitness club, you could have the facility manager, the management of the club can set those triggers.

They’re completely user-configurable. You could set it that if water runs for more than 10 minutes straight, we just want a heads up. Now in a fitness center, you might have those triggers at different levels, but it could be even that if water runs for more than 45 minutes continuous without a stop, we want a heads up. You can send someone around, look through the shower facilities, look, just check the toilets, make sure everything’s okay. It’s completely user-configurable. So you can dial in trigger points and then you can have a second layer. The first layer is just a heads up, hey, water’s been running for more than X minutes. The second layer, if water’s been running for a longer period of time, you can also program it so it will automatically shut the water off.

Dan: It won’t once you get that message, so it can be really important. And you might have … there’s two modes. There’s really think of it like a home mode. There’s an away mode. There could be in a way mode when the facility’s not occupied and water shouldn’t be running at all. In that case you might set it, hey, if water runs for more than one minute, we want a heads up.

Dan: And if it runs for two minutes, automatically shut it off or it could even be at one minute you get the warning and you do the automatic shutoff. Because it’s especially problematic when a pipe breaks after hours when no one’s there because every minute counts and the damage compounds over time. And fitness centers, you have a lot of valuable equipment there with electronics.

Dan: And so many pieces of fitness equipment. Now they’re all electronic, the bikes, the stair machines, the rowing machines-

Dan: All have electronics that can get damaged with a burst pipe incident. The stakes are pretty high. And when that happens too severe enough damage could cause you to close your facility for a period of time to do the remediation. You sometimes get mold damage, so it’s not only the damage to your property and your equipment, it also could be a damage to your membership. You might have to close your facility-

Dan: For weeks while you’re cleaning up the damage.

John: And then meanwhile, if all of your members are going somewhere else to say go to the gym or something like that, whether or not you can get them to come back to your facility after you finally got the word out there that “Hey, we’re back open again”. And they might say, “Well, I’m a member at this other gym now and I’m enjoying that.” You could really lose more than just the say couple of weeks that it takes to fix all the problems in your particular facility.

Dan: AbsolutelY. Absolutely. This is the number one claim for insurance companies, property and casualty, for fitness centers, it’s over 30% of their claims are water damage. A lot of insurance companies now want you to take a proactive stance and they’ll even incentivize you via premium discounts to install this type of technology. Some companies, if you’re in a cold climate too, they’ll even give you a second premium discount for having that freeze alert built into the Water Hero.

John: Right. It notifies you if the temperature gets down to a certain level and you might be in danger of your pipes freezing and bursting.

Dan: Exactly. It gives you the ambient air temperature and you can set it for both high and low alerts, but especially in a cold climate, it’s really helpful to have what’s called a freeze alert.

John: Right. All right. That’s really great information, Dan. Thanks again for speaking with me today.