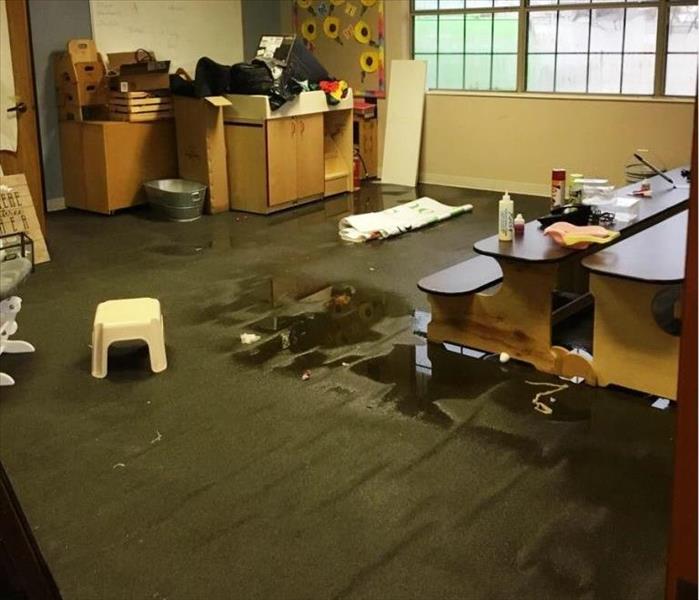 John: Sure. So Dan, what might be some of the ways that a daycare center would be using water on a typical day to day basis?

Dan: Sure. Daycare centers can have … First of all they have toilet facilities. Sometimes they could have a break room with water fixtures, could even be a kitchen for some food service like lunches for the kids. So, it’s got a variety of different water devices. And the more water devices, the more probability that you’re going to have water damage. And typically, in general, for homes, for small businesses, water damages, the number one claim for insurance company, property and casualty policy is about 30%. In daycare centers, it’s over 40%. And part of it is because you’ve got a lot of kids there that either leave the water running, get excited and run out to the other bathroom and that the sink is still on and overflows or the plumbers can tell you all sorts of war stories, finding beanie babies and dinosaurs, plastic dinosaurs that ended up down the toilet.

So, you have a magnified water damage potential in a childcare center is one issue. So, burst pipe protection is really critical and gives good protection to the owners of the facility too, and may help them get a premium discount on their insurance. But secondarily, a lot of our customers end up saving money on their water bills too, and that can really make a huge difference. Again, especially the more water fixtures, you have toilets get left running or there’s eroded toilet flappers you don’t even know about where water is silently leaking past the flapper, silently filling up to the tune of … It could be $1000 a year and magnify it again if you have that many more water fixtures.

John: Right. That’s a good point that the water fixtures can actually be sort of leaking or in the case of a toilet, it could be running or turning on and off occasionally and you might not even notice that. It doesn’t have to be necessarily a catastrophic flood that you’re seeing that ruins everything, but just water slowly leaking over time that you don’t notice, and that can definitely be an issue for a business like this.

Dan: Yeah, absolutely. In 60% of our customers find those type leaks within the first six months of installing a Water Hero. And in my own personal case, when I put Water Hero in, first day, I noticed when I looked at the 24 hour usage, we have a bar graph, I’m like, “How come we’re using 10 gallons of water at 1:00 AM, 2:00 AM, 3:00 AM, 4:00 AM, 5:00 AM when everyone is sleeping?” And it turned out we had one eroded toilet flapper, and it could have been doing this for years. Water was silently slipping through it and silently filling up to the tune of about $1000 dollars a year. And we picked it up immediately because it’s really easy. We provide real-time water flow data and then we have a graph for your usage. If your water never flatlines, if it never goes to zero, especially when it should, when the building’s not occupied, you know you have a problem.

Dan: Absolutely. And just picture a childcare center, if there’s any mold at all, I mean, you could be shut down by the health department. So, it’s a variety of different things but when you have a burst pipe, it’s a nightmare. I mean, you can have, first of all, damage to the building, damage to equipment, fixtures in the building. And sometimes you have to actually move out of the building to do remediation. So in the case of a business, you’re basically out of business or you’ll have to relocate to another site. It’s a complete nightmare. So, anything to avoid it, it gives you great peace of mind. And again, your insurance company may give you a nice premium discount to do it. And then the byproduct is you get benefit water savings.

John: Right. And the case of a daycare center, if you had to move out for a month at a time or something like that, you might have some people that if you could find another facility to temporarily be in, that might be okay, but parents might not be super happy about it. In the worst case scenario, the parents might just find another daycare center to put their kids into and then they might never come back. And then that could really be detrimental to your business.

Dan: They might worry that there’s lingering mold damage too.

Dan: And especially some kids are hypersensitive to those molds and different fungi.

John: So it can erode the trust as well.

John: Yeah. So how does it generally work, the leak detection and automatic water shut off? If I did install this in my daycare center, how would that work?

Dan: Water Hero is installed right where water first comes in the facility. And we have two major components that are plumbed in. One is a utility grade brass water meter, these are built American Water Works Association specs. They’re the same meter your city would put in and they have billing accuracy, so they’re real high quality meters. But instead of the old school black register odometer that reads gallons, we put our electronics on the top of that brass meter so we’re reading the water flow 200 times a second.

And we also put a temperature sensor on there so we can provide your freezer loads for example, that are very, very valuable and sometimes you get an extra premium discount for that. That data is fed into our main controller box that is located typically within six feet of that smart meter. And that has a very powerful microprocessor in it, has a wifi chip, it’s got a backup battery, rechargeable backup battery too. So even if power’s out for four days, you’re still protected with that local microprocessor. Right after our smart meter is a motorized ball valve shut off. So these are standard, super robust, reliable parts that plumbers are familiar with, any licensed plumber can install this relatively easily, and it gives great peace of mind to the owners.

John: Right. So, by having that installed, you can set it to automatically shut off the water if it senses that there’s a major use of water when there shouldn’t be.

Dan: Exactly. It’s all time-based. So, people can relate to it in their own home, for example. And you do the same thing for the childcare center. But in my home for example, I have it set in home mode when the home is occupied. After 10 minutes of continuous waterfall, I get a text alert and/or email alert. And after 20 minutes, it automatically shuts the water off and sends a text message. And we’ve had a great experience. Typical family of four, we’ve had no false positives because we have it dialed in exactly where we want it. And the kids decided as a team know they can get out of the showers, no more 45 minute showers. They can get out in 15 minutes and we’re saving money right there because people are being better water citizens. And it’s the same thing would apply at a childcare center. When things like dishwashers, washing machines are running, they’re not a problem either because they might draw water for two or three minutes and then they shut off for five minutes and then it goes to another cycle.

Dan: Yeah. But that said, those are totally adjustable. It could be 11 minutes and 29 minutes or 31 minutes, whatever makes sense for your facility. And away mode, in my home I have it set for one minute, I get a warning and also at one minute it’ll automatically shut it off. But I could set that at one minute warning, two minutes. Let’s say if I had an ice cube maker that runs for a minute and a half, so I could have at one minute, I’ll just get a heads up that water’s run for over a minute when we’re in away mode, and at two minutes it’ll shut it off. So it’s all very nicely user-configurable.

Same thing on those temperature alerts too. You can have a low temperature alert. So in my case, if it’s ever below 40 degrees at my Water Hero, I want to know about it because I could be risking burst pipes. Mine’s in a basement and my basement’s never below 45 degrees. And that actually saved me once I had an [inaudible] blow open my side basement door, snow was piling. And so it’s 10:30 at night, I get a text alert upstairs and wow, the basement’s gone below 40 degrees.

Dan: And I would have had frozen pipes or it could be your furnace breaks in your basement and the temperature plummets. So it provides a real nice level of peace of mind and just protection from catastrophic burst pipes or just help to save money on your water bill. And you can also, from any device, it could be a desktop, a laptop, a tablet, the browser on your phone, you go to mywaterhero.net and you log into your account. And really anywhere in the world you can control your device, you can change it from home mode to away mode. You can change those time-based triggers and you can also turn the water on and off from anywhere.

John: Right. So, for a daycare center, maybe you have it set to away mode after the parents have all come and picked up the kids or on the weekends when they’re not there at all. Or maybe on a school vacation week when maybe you don’t have the daycare center open, say, you’d want to have it in a way mode for an entire week, and you can configure all of that.

Dan: Exactly. And you can configure it again from anywhere in the world where you have an internet connection. You could do it right from your phone. So it’s really convenient for people, very easy to operate in. And sometimes some facilities have multiple locations, so you can put them all on the same dashboard too. So you could drill into daycare centers, one, two, three Main Street. It could be three, four, or five, six Washington Street. So you could have hundreds of devices on the same dashboard, and then drill into each specific location.

John: Interesting. All right. That’s great information, Dan. Thanks again for speaking with me today.

Dan: Thank you, John. And for more information, you can visit the Water Hero website at waterheroinc.com or call 877-662-4496.