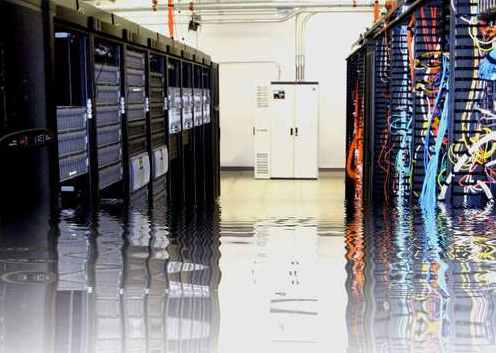 Dan Sterling: Thank you, John, great to be here.

John: Great, so Dan, when we’re talking about data centers, obviously you certainly wouldn’t want to have a catastrophic flood in your office in the server closet or something like that, and that would certainly do some damage to your business, but when we’re talking about a data center, we’re generally talking about a business that’s just racks and racks of servers and things like that, that maybe it’s a hosting company for websites, say, or something along those lines, right?

John: Of course, yeah. Is that sort of the main issue in terms of data centers and what they would want to protect against by installing a leak detection and automatic water shut off valve, is a catastrophic leak like that from maybe a burst pipe or something?

Dan: Right, right. Yeah, that’s the number one objective for a data center, that they want to mitigate that risk and protect themselves from a catastrophic pipe burst. The secondary benefit, though, is they also get real time water information. It can help them save money on their water bills, because so many facilities use a lot of water too. But no, absolutely, the main driver is just protecting that site from water damage.

John: Talk about the automatic water shut off valve and how that works and the options for setting it up and configuring it.

Dan: Sure. Yeah, water here is a whole building, a whole facility leak detection device, and the way it works is Water Hero gets installed right where the water first enters the facility. And we have two pieces that are plumbed in. We have a utility-grade water meter. These are built to American Water Works Association specs. They’re robust, they’re reliable, they’re accurate. These are billing-quality meters that a pality has to put in that grade meter if they’re going to charge for water usage. So, there might already be a city meter in the facility. We would go right after that with our own meter, but the difference is ours is a smart meter. Instead of the old school black register with the odometer reading gallons that the water company reads, we put our electronics on the top of that utility-grade brass meter, and we’re reading the water flow 200 times a second.

And we also put a temperature sensor on there, so we can give the ambient air temperature of the meter too, which can help for things like freeze alerts, for example, if cold climate. Or it could be set on a high end too. And in my case, in my home, for example, I have it set … if it’s ever below 40 degrees at the meter, I want a heads up. If it’s ever above 80 degrees, something bad like a fire could be going on, so it’s good to get that alert.

But right in line with that smart meter is a motorized ball valve shut off, or automatic shut off. Our data, the flow information, the temperature information, is fed into a microprocessor, our main controller box, and that’s a very powerful microprocessor that provides local control and automatic shut off if certain triggers are exceeded. And the triggers are continuous flow of time, so it could be if water runs for more than 10 minutes, someone in the facility or an entire group will get a text message. If it’s 20 minutes, it can be programmed so it automatically shuts the water off and you get a text message. And there’s a home mode and an away mode, so depending on what the occupancy, you can totally user configure those trigger points. It’s great because the user is in control, and they can set it for the needs of their facility, and they avoid false positives.

John: Right, they would be able to set it so that if it’s typical that they use a certain amount of water during the day on the weekdays when the office is open, they can set it for that level, and if it exceeds that level, it shuts off the water. But maybe on the weekends, they don’t use much water at all, and so it’s set at a lower level, something like that.

Dan: Exactly, it could be the weekend and even evenings, they could switch it from home mode to away mode.

Dan: And to give you a sense of this on a residential setting, in my house I have it set in home mode at 10 minutes of continuous water flow, I get a heads up. And at 20 minutes, heads up and it shuts it off. It worked out perfect, because dishwashers only run for maybe … draw water for three minutes and then they’re off for four minutes and they turn back on. Same with washing machines. The great thing … the kids, no more 45-minute showers. They know they need to get out of there on a timely basis.

And then in away mode, in my home, it’s set for one-minute warning and one-minute warning and shut off. But I could make that one minute and two minutes if I had an ice cube maker, say, that ran for a minute and a half. So, that same logic applies to a data center. It could be that they have a time when employees are there, a lot of employees are there, and so they might have a higher threshold for those triggers, whereas evenings and weekends they could put a very, very low threshold on those triggers.

John: Right. And so it could be just something as simple as the toilet overflowing or a sink being left on or something like that, that could cause a flood. And then in a data center, like you said, it could cause some catastrophic damage to all the electronics.

Dan: Absolutely, all of the above. Sometimes it’s as simple as a $6.00 supply hose if the toilet breaks, ruptures. For some reason, a lot of this stuff happens on the weekends when no one’s around, and the damages compound. Every minute counts, and it’s especially damaging with a situation where it’s unoccupied. Insurance companies are very keen with water damage too, because it’s their number one controllable claim. It’s about 30% of claims for property and casualty for both residential and in the commercial setting.

And some commercial settings are even higher if you have more water fixtures. Someplace like a health club with showers or a facility with showers and restaurants, sometimes they can be 40, 45% of their claims are water damage. And you not only have the damage it can do to the facility, sometimes you get mold damage and it can shut a facility down.

John: I would imagine that at a data center they’ve got a lot of expensive equipment and their policies must be very high in terms of having … if they had to replace all of the electronics in a data center, that would be a huge amount of money.

Dan: Yeah, absolutely. And that’s why a lot of insurance companies now are starting to offer premium discounts for people that are taking a proactive approach and protecting their business, because they’re also mitigating 30 or 40% of the insurance company’s risk.